This is my final post from the Great British Bake Off challenge which I set myself back in the summer. From now on my posts will take a different turn. I will still keep a baking theme running through them but I will also write about the birth of my little business and the ongoing renovations to our house. I will try to touch on other topics which feature in my life too, spice things up a bit. I have travelled quite a bit so I fancy doing a few reviews of the beautiful places I have visited.

This blog has taken a while to prepare, mainly because there has been a lot going on here in the Money Pit. The orangery is almost finished. We are waiting for the electrician to come and do the second fix then it’s just a case of paint and flooring. I love the glass lantern roof and since the sun was shining yesterday I took a rug into the newly plastered room and lay down, gazing at the sky. It was lovely and warm in there and I was soon joined by my three dogs who all snuggled in. For a short while all was well with the world. I think I felt as close to meditation as I ever have during that time. It reminded me that we all need to stop sometimes and just be.

So to the final of Bake Off. What a tough competition that was! The three finalists were very closely matched, I felt, and they all got a chance to shine in different disciplines. The signature bake was all about doughnuts. This was a deceptively difficult challenge and not one I was going to try to replicate at home. For a start I don’t own a deep-fat fryer.

The lovely Kim Joy finally got Star Baker in the frankly ridiculous technical. In a new twist, this bake was set outside the tent. At first I thought the producers were being kind to the contestants, who have had to deal with exceptionally high temperatures during our wonderful summer. But then I realised that they seriously expected them to cook pitta breads over an open fire!! They also had to make a trio of dips which were not especially complex, the pitta being the main attraction and Kim Joy managed to burn hers the least. For the next series, I would like to see the final revert to its original format. A proper bread challenge would have been nice. Just my opinion.

And then there was that showstopper. I quickly realised, with a sinking heart, that I was going to have to do this bake and it filled me with dread. I loved watching the bakers creating wonderful landscapes, filled with colour and imagination. It started with a bang, literally, when one of Rahul’s glass kilner jars exploded all over his bench. This resulted in him having to ditch everything he had already prepared and for a minute I was worried that he would just fold and walk away. The producers agreed that he should be allowed extra time at the end to make up for the time he lost and I think that was fair. Not only did the bakers have to make a 3D landscape, they also had to use three types of bake, pastry, sponge and biscuit. I was expecting scenes from real places but they all chose fantasy landscapes which gave them some artistic license and once I began to think about my own bake I realised that this was probably a wise move. In the end, the judging came down to flavour rather than appearance. This was definitely not a round of “style over substance”, all the finished bakes were rushed and a little untidy, but the judges clearly found the individual items on Rahul’s delicious and he was crowned the champion in an emotional ceremony. I think all the finalists will go far, they are such wonderful personalities and many of us warmed to Rahul’s self-depreciating dead pan humour. He is the most unlikely of champions, but the sight of his fellow contestants joyfully hoisting him into the air after the reveal was proof that he is very highly thought of. I found it heart warming.

It took me quite a while to decide what sort of landscape I wanted to create for my showstopper bake. My immediate thought was to make the harbour at Ilfracombe. It is my favourite place in all the world and holds wonderful childhood memories. The home of my beloved grandparents since I was very young, I try to get back there at least once a year, even though they are now both sadly passed on. As soon as I drive over the hill and see Hele Bay beach below I am instantly transported back to my seven year old self. The excitement is such a rush. I did a few drawings, imagined making a copy of the beautiful Damien Hurst bronze which stands proudly guarding the end of the pier and then realised that I would never be able to do it justice. I’m not very artistic or confident at modelling in fondant so I needed some inspiration and I also wanted to do something which reflected the season. 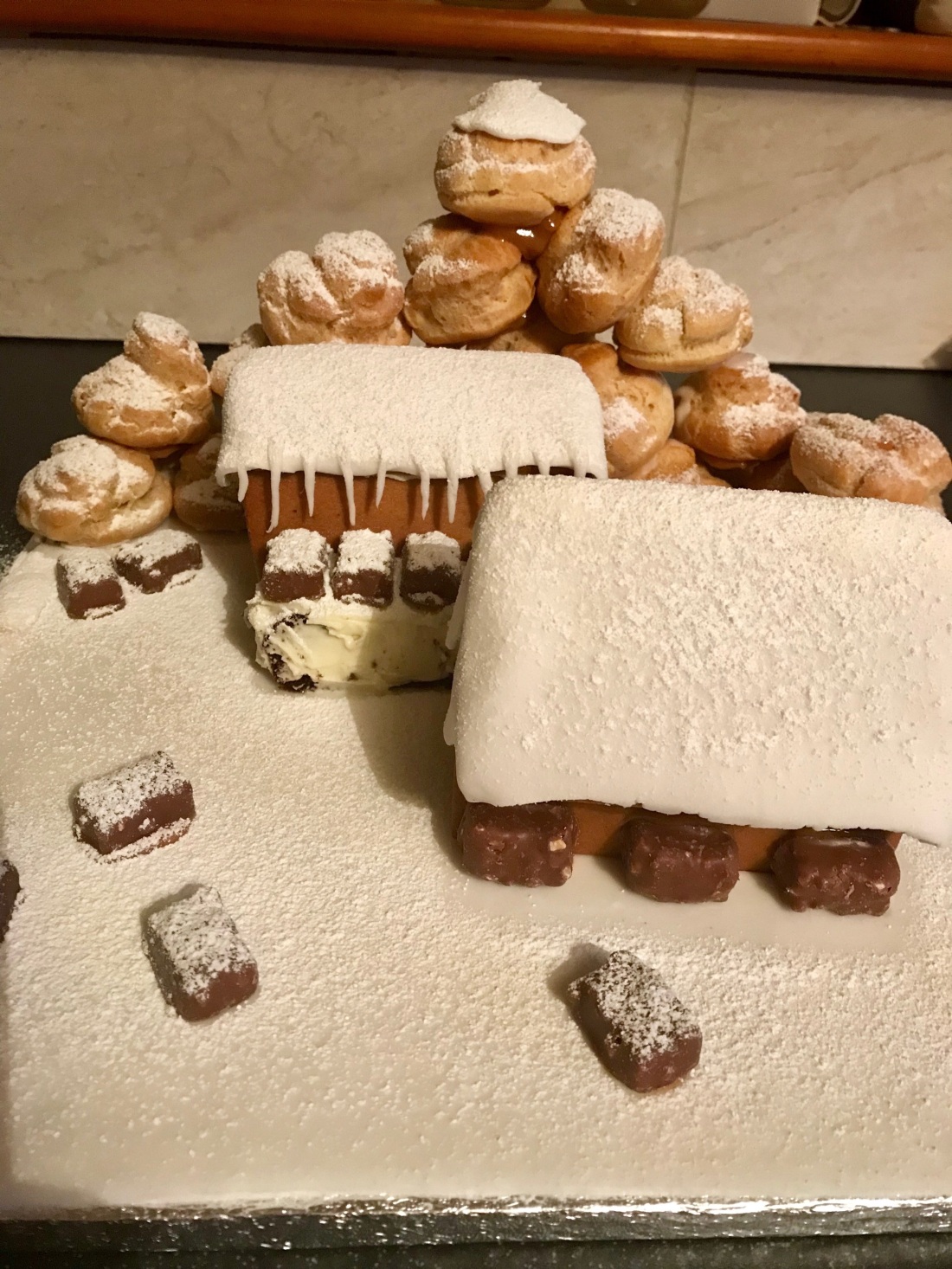 This is my Alpine winter scene, inspired by a photo my husband took in Bavaria. It’s not perfect. The perspective is all wrong, the little houses would be much smaller against the mountains and wouldn’t have chocolate windows but hey, I think it’s an okay attempt.

The mountains are choux buns filled with caramel. They are light and melty and my 10 month old grandson’s eyes became wide with joy as he was allowed to taste some. The houses are made from chocolate velvet cake with gingerbread walls and roof. Everything is covered in a blanket of fondant snow and dusted in icing sugar. It took me two days to make all the components and all of yesterday afternoon to assemble everything so I appreciate how difficult it must have been to produce the showstoppers in the tent within a time limit. I gave the whole thing to my son and his girlfriend as at the moment I am alone in the house and I didn’t want to raise my blood sugar levels to dangerous heights!

I am still trying to decide whether or not to apply for next years Bake Off. I downloaded the (very long) application form and looked through the pictures of my recent bakes but I still haven’t made up my mind. I’ll let you know. Meanwhile, I now have a whole week of baking to do for my local MS Therapy Centre’s Christmas Fair next weekend. I have planned a range of festive goodies, including some vegan and gluten-free varieties as requested. Perhaps the smell of fruit cake laced with brandy will force me into the Christmas spirit!

Thanks for reading. xx

Hi. I'm 49 and busy setting up a vintage china hire and afternoon tea business. I have three grown up children and a baby grandson. I live with my husband and our three dogs in a house we are currently renovating from top to bottom. My dream is to buy a chateau in France and run a guest house. View all posts by shellteacup

One thought on “All Good Things Must Come To An End.”